Peter Freer, Founder
"Sir, there are still terabytes of calculations required before an actual flight is..." says J.A.R.V.I.S. to Iron Man in the first Iron Man movie. Yes, Iron Man may no longer be coming to the big screen after the End Game; however, the focus here is on J.A.R.V.I.S. the AI-based assistant that helps Iron Man achieve success in every project. Now, imagine a real-life J.A.R.V.I.S. like A.I. bot that is integrated into a car and assists in driving. Sounds exciting, right? Well, that is precisely what Freer Logic is working to accomplish. Today, on the one hand, most automotive companies are leveraging deep learning for face detection or emotion detection via computer vision and image processing sensors to assist the drivers. Freer Logic, on the other hand, has gone a step further and has successfully developed a biosensor device called Neurobiomonitor (N.B.M.) that provides brain data in real-time, without contacting the vehicle’s driver. It helps to improve driving safety by tracking drowsiness, fatigue, cognitive load, and distraction. The current range of the N.B.M. works at six to ten inches from the head, which makes it quite a breakthrough as there are no visible wires or sensors involved and makes it an incredibly valuable tool that functions discreetly to enhance safety. "It is simply like a microphone listening to one’s voice, only here it is the brain that is sending the data," says Peter Freer, Founder, and C.E.O. of Freer Logic.

Nevertheless, why use the N.B.M instead of computer vision, and are there any advantages associated? Well for starters, a biosensor will capture the event right from the place of origin (brain) as opposed to the camera-based system, which determines the physical manifestation of activity that the brain has triggered minutes earlier, leading to a reduction in response time. Moreover, determining fatigue through a camera can be affected by external factors like lighting situations and camera angle. With that fact established, biosensors, or neurotechnology as a whole could be the answer to many problems that are preventing autonomous driving from becoming mainstream.
Elaborating in detail about their N.B.M., Freer says that their technology is embedded in the headrest, and it senses the neuro-signals emanating from the driver's head. Nothing is injected or attached to the head, but the device passively listens to what the driver's brain is doing in real time. For example, when the driver moves from a semi-alert stage to a drowsiness stage, the N.B.M. alerts the driver via haptic technology vibrating the seat. Then if the driver remains in the same state, the second warning will be an audio alert. Lastly, if there is no improvement, the system will automatically slow the car down and eventually pull it off the road bringing the car to a complete standstill. Moreover, measuring the accuracy, Freer Logic has successfully tested its drowsiness algorithm on three separate occasions with aeronautics manufacturers, O.E.M., and tier 1. On all three occasions, they have surpassed the response time when compared to camera-based systems by about 4.5 minutes on an average is due real-time data being recorded accurately and right from the source saving crucial time. What this boils down to is the technology that can be a boon in manual driving say until S.A.E. Level 3 if not more. Speaking of which, currently until Level 3, driver's engagement is still required, and companies like Tesla and Mercedes- Benz have implemented ways such as the pressure or the touch of the driver on the steering wheel. However, they may be bypassed in one way or another, and using N.B.M. will ensure that the driver is engaged, by gathering the brain data.

The vision of the Freer Logic as a company is pointing towards an autonomous future, primarily because the technology is exciting but majorly because of the experience, which Freer has in the industry. He was inspired by N.A.S.A.'s use of neurotech to train astronauts, on similar lines; Freer patented and integrated cognitive skill training and behavior shaping to produce the first neurocognitive training system for A.D.H.D. children and adults—Play Attention. His expertise in neuroscience and the practical applications in the field of education and human performance have garnered Freer six patents with others pending. Freer’s introduction of non-contact neural signal (Thought Reader™) technology is the one used in N.B.M. Speaking about this technology, he envisions, "I think that biosensors in the car will provide many solutions to the inherent problems of engineered distraction in the vehicle.
So, in future, biosensors that check heart rate and respiration will be employed by several manufacturers, whereas Freer Logic specializing in neurosensing, will be at the forefront of this transition." To this end, the company is already working towards a heart monitor that can be integrated into the seat, which when coupled with the N.B.M., can enable the advance driver-assistance system to monitor passenger emotion, stress, relaxation, and more. Additionally, Freer adds, “With car neurotech, we will transition into something that will fit automated driving incredibly well." In the future, as per Freer, the car will have sophisticated systems that can cater to the driver as well as passenger needs. Imagine J.A.R.V.I.S. like interface that would include perhaps things such as waking the passenger up for a meeting and then offering some games to be in a peak performance state for the meeting. Alternatively, automatically playing some soothing music after detecting the stress level of the driver, or reclining seat for the passenger if they are a bit tired. Hence, the possibilities are endless. "We truly do envision a J.A.R.V.I.S. like interface in the vehicle in the upcoming years that will be directly communicating not only with you verbally but also in other ways per your needs,” adds Freer.

For automotive safety, Freer Logic has a strong offering, as Freer quotes, “In automotive, we have trademarked a term called ‘conscious car,’ where it means that the car will become aware of the driver.” However, use cases of neurotech are not restricted to automotive safety. Freer Logic has successfully leveraged the technology to provide training exercises in the car, truck, or SUV. The N.B.M measures neuro-signals that can be used to control real-time applications to reduce stress or practice mindfulness. This is the same technology, which Freer Logic has used to train Olympic athletes, nuclear power operators, NASCAR pit crews, and many others. Freer says, “Imagine a time where you are sitting in your car waiting for your child to finish their piano lesson, karate lesson, or soccer practice. You start an app and a beautiful beach sunset appears on your console. Training your brain to relax will make the sun set, bring out the stars, and raise the moon. No hands required! We can do this with mindfulness training as well. We have broken significant barriers in neurotechnology, and now we can use this discreetly to increase safety and in other cases increase human performance," concludes Freer.
- Lester D'Souza
September 01, 2019

Description
Freer Logic offers a biosensor device called Neurobiomonitor (N.B.M.) that provides brain data in real-time without contacting the vehicle’s driver. It helps to improve driving safety by tracking drowsiness, fatigue, cognitive load, and distraction. The current range of the N.B.M.works at six to ten inches from the head, which makes it quite a breakthrough as there are no visible wires or sensors involved and makes it an incredibly valuable tool that functions discreetly to enhance safety. Their technology is embedded in the headrest, and it senses the neuro-signals emanating from the driver's head. Nothing is injected or attached to the head, but the device passively listens to what the driver's brain is doing in real-time 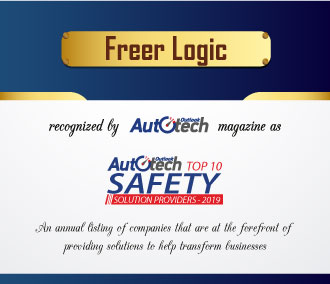 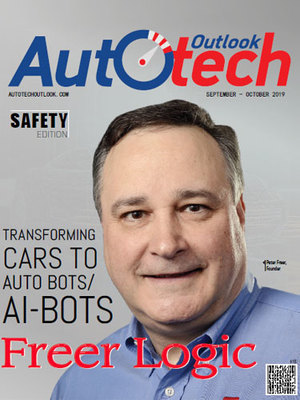 "With car neurotech, we will transition into something that will fit automated driving incredibly well"